The Pink Box in the Closet

The End of the Beginning

We are Go for Launch

So, part of parenting (and we could certainly debate how big a part it should or should not be) is having your own kids experience the best moments of your own childhood. We see it all the time: A grandfather passes a tradition, or a lesson, or an activity down to a father, who then passes it down to a son. Sometimes parents can swing too far in that direction, forcing things upon their kids, but I don’t think I have ever met a parent who has flat out refused to share the positive aspects of their upbringing with their own children. It just doesn’t happen.

I wanted my kids to enjoy games.

But something happened to games over the years. Games had gotten expensive. Like, really, really expensive. And we didn’t have a whole lot of money.

To clarify, we never went without. We always had a roof over our heads, food on the table. I don’t want to make this sound more dramatic than it was. But taking a trip to Wal-Mart to buy a board game? That just wasn’t a realistic option.

So, what’s a father who wants his kids to experience the thrill of playing a great game to do? I decided I would make a game. I would make the greatest game of all time.

But, before the game, there was this story.

My youngest daughter and I had written a story together, about a wonderfully charming world of Shibbers, and Hover Boats, and Hounds, and Pagley O’Fuzzinstuff. I would do the writing, she would offer suggestions and come up with some of the names.

And so the Keko Chronicles began.

And I decided that if I was going to make a game, a game based on this wonderfully charming world of Shibbers, and Hover Boats, and Hounds, and Pagley O’Fuzzinstuff might be pretty neat.

And I started making cards. 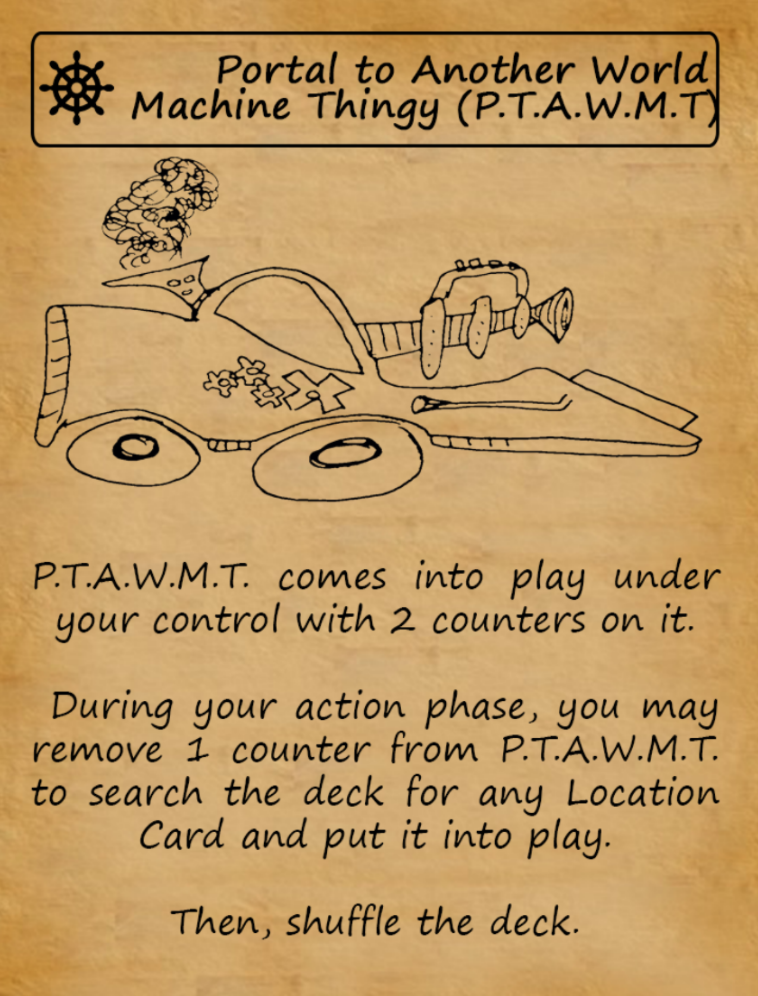 The first card I made was the P.T.A.W.M.T. (Portal to Another World Machine Thingy). It was a central part of the first chapter of the Keko Chronicles. Lord Quiggs swoops in driving his P.T.A.W.M.T. and takes Samantha and Daniel Keko to the world of Nuggles. The game had to include the P.T.A.W.M.T. Then, I made the Shibber Queen, and Krystal cards, and Pagley’s Hover Boat and so on and so forth.

I made character cards and action cards and I made the Mask of Unwanted Sorrows and the Keko Journal. And I thought it was going to be the greatest game anyone had ever played in the history of the world. Ever. I was so proud. What a great fatherly moment!

And we played the game.

And the kids loved it! Loved it!

But there was one gigantic, unavoidable problem.

Painfully horrible. It wasn’t even the least bit fun. It was like playing one of those never ending games of War in 90 degree heat. While being stung by bees.

But the kids loved it, so we kept playing it. And it was miserable.

Next: The Pink Box in the Closet


The Mask of Unwanted Sorrows

The History of Waximum the Weird